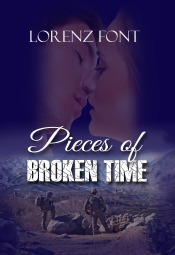 When Blake Connor returns from Afghanistan, he wants nothing more than to hide from the world. He’s plagued by the memory of his best friend’s death and the pain of his own injuries. That same friend’s dying wish is just one more burden he must carry.

Jennifer Owens had expected to get married the moment her fiancé returned from the war, but the news of his death changed everything. When an unexpected letter arrives a year later, it raises new questions and opens old wounds. Her search for answers leads her to Blake’s doorstep.

Although Blake seems determined to keep her at arms’ length, Jennifer recognizes the beauty that lies beneath his scars and confronts him with the truth. Nothing will ever be the same for this broken ex-Army Ranger, but he must overcome his warped self-image and emotional scars if he’s going to be the man Jennifer deserves.

Praises for Pieces of Broken Time

*Lorenz Font is a new star on the rise! She never fails to tell compelling tale that evoked emotional reactions in readers. Her novel, Pieces of Broken Time is an enjoyable tale of second chances in life.

* I am not sure I have read another story about PTSD and returning warriors that capture the emotions and reality like this one does.

* This is a story of love yes but it’s so much more , it’s a journey through the darkest reaches of pain and on the other side? Hope!