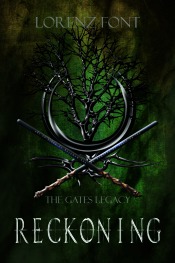 Someone is exposing the vampires of New York City to the human world. This is bad news for Cyrus and his fighters. Events derail his plans to find Zane, who forced immortality on him. Cyrus soon finds himself torn between revenge and his responsibilities, and a beautiful pureblooded vampire who makes him rethink his priorities.

Isidora can read minds, and Cyrus’ are filled with both anger towards Zane and a deep admiration for her. Although Issy has no idea what to do in the face of the outside world’s war, one thing is clear. She craves Cyrus, but his need for vengeance is clouding his mind.

Should Issy pursue her feelings for Cyrus or wait until he can return her affection? Will Cyrus deny his attraction to Isidora so he can kill the man who made his life a living hell on earth? Every decision leads to a reckoning.

“This is the fourth book in The Gates Legacy series and it’s a vampire series that just keeps pouring on action , danger and even romance. Not what I would describe as strictly paranormal romance but certainly a series with bite! Vampire politics are taken up a notch with this instalment and it’s a juggernaut of a book that just keeps powering through a plot that pulls no punches.”

“Every time I get the next book in this series I’m blown away. I keep thinking that they can’t all be good each and every time, and I am always wrong. ”

“Book 4… As the others before will keep you just on the edge and keep your finger turning the pages. The constant on your toes, the smoking passion. Following each fight, each growth within the couples. A roller coaster of emotional up and downs and so very worth it.”